A yogurt is a living product! It is made from milk fermented by two bacterial strains: Lactobacillus bulgaricus and Streptococcus thermophilus. Whether it is fruit, plain, flavored, firm, stirred, or Greek, it must have been fermented exclusively by these two bacteria in order to receive the name “yogurt”. If the milk has been inoculated with other ferments, we then speak of “fermented milk” and no longer of “yoghurt”.

The addition of fruit is done in different ways: either you use real fruit (cut or mixed), or you use flavorings (sometimes both).

The amount of real fruit found in the jars varies by brand: 1%, 5%, 12%, etc. Of course, the more the better, and flavorings are the option to avoid. We will elaborate on this point later.

Animal milk yoghurts and plant-based yoghurts: what are the differences? 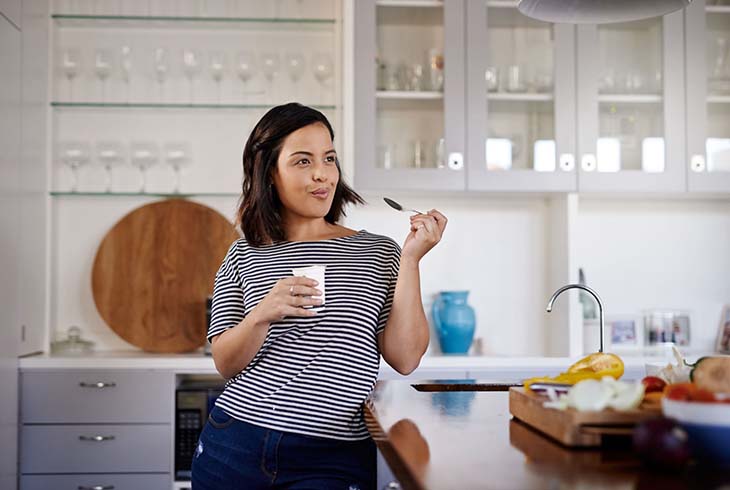 It is possible to find yogurts fruit based on milk of animal origin (cow, sheep, goat) or vegetable yogurts based on vegetable ingredients (soya, coconut, almond, etc.). However, the latter are not authorized to be called “yogurts”, this denomination being authorized only for products using animal milk. We then speak of “vegetable dessert” (“soya dessert” for example).

If the yogurt is necessarily fermented with two strains of bacteria, this is not necessarily the case for the vegetable dessert. It can thus be fermented or not, and generally contains thickeners or gelling agents in order to approximate the texture of yogurt. In addition, this type of product often contains many additives and the list of ingredients can quickly grow and become incomprehensible: tricalcium citrate, calcium salts, antioxidants, fatty acid esters, etc. The vegetable dessert is generally a little less sweet.

Lots of sugar, flavorings and additives

Up to 3 sugar cubes per jar!

On average, there is 14% sugar in fruit yoghurts, which is the equivalent of 3 sugar cubes for an individual 125 g pot. They are therefore very sweet products to be consumed on an occasional basis. A fruit or flavored yoghurt milk animal contains an average of 2.5 sugar cubes per 125 g jar compared to 2 for a vegetable “yogurt”. A fruit yogurt should ideally contain no more than 12 g of sugar per 100 g, the vegetable version being a little more interesting from this point of view.

The other important point to watch out for is the type of sugar used. While some products use cane sugar, which is a good point because it contains some vitamins and minerals, others use glucose or glucose-fructose syrup.

These syrups should be avoided because they are processed sugars and their glycemic index (GI) is much too high (95 to 100/100 against 65 to 70/100 for cane sugar). Glucose syrups and others, in addition to being refined, promote insulin spikes and therefore a more pronounced dysregulation of blood sugar. In addition, consumers of processed foods containing this type of sugar are more prone to cardiovascular disease, diabetes, obesity and dysregulation of the intestinal microbiota.

Finally, also pay attention to products using fruit jam. They are often sweeter because sugar is added in the preparation of the jam. A fruit yogurt is not a yogurt with fruit jam… 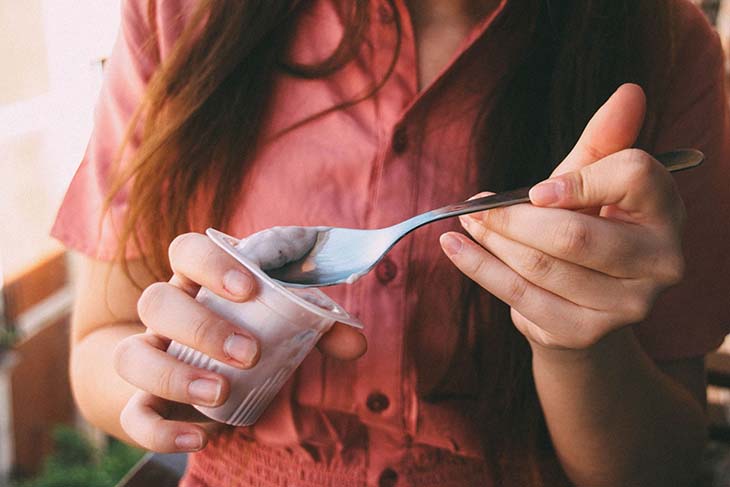 A good fruit yogurt should contain only real fruit. To do this, read the list of ingredients carefully: if you read for example “strawberry 12%”, this means that there is fruit, up to 12%.

Above all, do not be fooled by the image of the fruit on the packaging, because that means nothing! Indeed, many brands play with images, but instead use flavors, many of which are artificial because they are cheaper. Flavor claims can be confusing… To see more clearly, let’s take stock. If you read:

Many fruit yogurts contain additives. The majority of them are thickeners and gelling agents, emulsifiers, colorants, preservatives and sweeteners. Thickeners and gelling agents are widely used in this type of product in order to provide the desired consistency, such as creaminess or smoothness. Among the texturizers, the most widely used are modified corn and cassava starches as well as carrageenans. Pectin then guar and xanthan gums follow.

There are different categories of additives whose effects on health vary: some are classified as green (acceptable), others yellow (tolerable), orange (not recommended) and red (to be avoided). If it is especially necessary to eliminate the last two, it is better to avoid additives as much as possible in general. Indeed, we must not forget the famous “cocktail effect”, because we consume many different foods every day. Even with small amounts, an accumulation of additives takes place in the body, which deteriorates the health of the intestines.

No, they are to be avoided! 0% fat yoghurts generally contain many additives as well as artificial sweeteners such as aspartame and acesulfame K. Indeed, in order to restore the creaminess of the yoghurt (lost by the absence of fats), thickening agents and sugar are added. This is the case, for example, with “0% fat fruit yoghurts – Yoplait Basket”.

The case of organic yoghurts

Organic yoghurts are made from organic milk, fruit and sugar. The production is the same as that of conventional yoghurts. According to regulations, organic products do not contain artificial colors, flavors or flavor enhancers. Although they generally contain fewer additives, around fifty of them are however authorized (against more than 300 for non-organic products). So be careful all the same with organic, do not close your eyes to their composition and continue to analyze the list of ingredients. The additives mainly used are gelling agents and thickeners such as carrageenans (E407), agar-agar (E406), carob seed flour (E410) and pectins (E440).