How to plant cilantro in your garden? (And how to use it)

Despite bitter detractors, this real delicacy from the Orient has imposed itself on our tables for several years. To treat us… and help us digest.

Coriander looks a bit like flat parsley, it grows in clumps 60 to 80 centimeters high. The stems are erect, cylindrical and branched towards the top. The leaves are cut as one approaches the top of the stems. The white hermaphroditic flowers, in summer, are collected in umbels.

Coriander originates from Western Asia, Southern Europe, and the Near East, but its origin is still not fully understood. We know that it thrives all around the Mediterranean, we have found some archaeological traces of this wild plant widespread in southern Europe, and one of the oldest testimonies is found on an Egyptian papyrus from 1,500 years before our era listing plants for medicinal use. The etymology brings out the Greek root koris, or “bug”, to recall the smell that the plant gives off and that some liken to that of the crushed insect, to disgust you with this aromatic which deserves much better than a pout of disgust. Others, just as disgusted, evoke a taste of soap. But hey, it seems to be a matter of genetics… A specific gene, OR6A2, controls our sensitivity to aldehydes, a chemical component present in coriander, but also in soap… The least we can say , it is that the Arabic parsley, or Chinese, has a pronounced taste and aroma: it likes or does not like. But it is unequaled for spicing up white and red meat dishes, lamb, mutton, fish or vegetables. 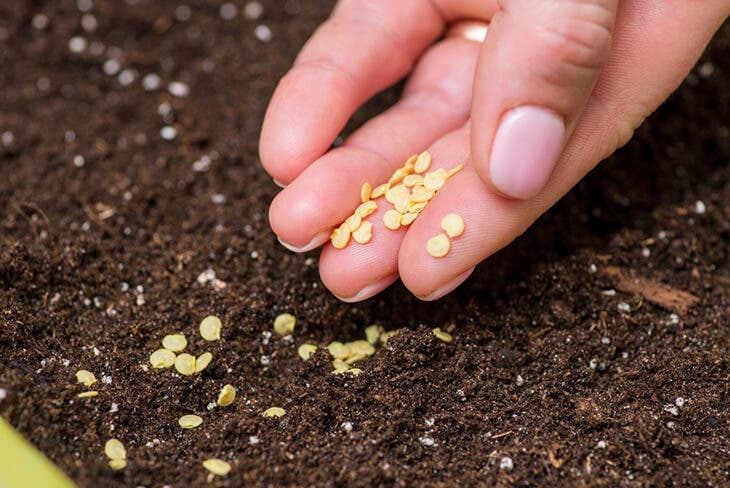 coriander in the garden

It is a biennial plant most of the time, grown as an annual. In March-April (but also in September in mild climates), sow in rows 25 centimeters apart to ½ centimeter deep. The germination time is about 15 days, but emergence can be irregular. When the plants have 4 or 5 leaves, thin out to leave only one plant every 20 to 25 centimeters on the row. In a large pot or planter, sow all year round at 18°C. After emergence keep a plant every 15 centimeters in all directions. As with parsley, sowing is mandatory every year to never run out of fresh herb leaves.

If your needs are limited, and especially intended for the kitchen alone, you can buy in April one or two plants already grown in the garden center. Cilantro being very popular, you will find it easily. For a culture in the ground, plant a subject every 20 centimeters approximately.

As soon as you sow, but especially as the warm months approach, keep the soil cool by regular watering to avoid premature flowering (and seeds). Mulch abundantly to limit water loss and the frequency of watering.

Coriander is chilly, which is why we reserve the biennial culture in the south of the country. Its stems are slender and do not withstand the wind well, choose a sheltered place in the garden. Fall is the best time to lightly spread organic fertilizer in anticipation of the second year’s growth.

We remember each time, we must speak of “grains”, because we harvest the fruits which themselves contain the real seeds from a botanical point of view. But this small precision does not detract from the flavor and the properties of the beans. In August-September, get up a little early, at the dew, to cut the umbels bearing very ripe fruits: they are generally dark brown for the most part, some remain lighter, and evenly colored. By being early in the morning, you will avoid the heat of the day from causing the grains to fall, and therefore losing them. Dry them in the sun or in a ventilated place. Beat them over a large clean cloth and bag your grains in kraft paper. Some of them will be used as seeds for the following year (they retain their germination power for five or six years), but the majority will end up in the kitchen or as comfort medicine.

The future of coriander?

Faced with the craze, a few varieties that are still very few and not always widespread are offered. Such as “Delfino” (syn. “Confetti”) with leaves reminiscent of those of ferns, or “Lemon”, reputed to be more subtle. “Morrocco” is recommended for its smaller and more pungent seeds. As for “Microcarpum”, you will have to find it in Russia (not the best time…) or in Central Europe during future trips.

Its main virtues, in internal uses, are digestive, aperitif and carminative. It also calms diarrhea and its spasms – this is mainly due to the seeds. It is rich in vitamin K, but it should be consumed excessively to take it into account in the event of anticoagulant treatment. In external use, its oil is a good muscle relaxant, its richness in linalool, with a good fresh smell, makes it a bactericide, an antifungal, but also an anxiolytic, a calming agent and a sedative.

Coriander in the kitchen

It is unthinkable to do without coriander in Mediterranean cuisine. What would the chorba, this delicious Algerian soup, the Tunisian mechouia salad or the multiple Moroccan tagines, for example, be without it? Like many broad-leaved and green aromatics, it should be used finely chopped and added to hot dishes at the last moment, because its taste qualities deteriorate in the heat. It is better to prefer the consumption of fresh or dried leaves, or ground grains, but avoid cold storage, as it does not support defrosting well.

The other way to use and store cilantro is to pick its seeds. They are used in many oriental spice blends, curry, garam masala, ras-el-hanout… present in couscous, tajines, curries, stuffings, meatballs, keftas, etc. They are used sparingly in certain oriental pastries, cakes, gingerbread or to spice up fruit poached in syrup.

A little dull the infusion of coriander? Not if you give it a little relief. Gently crush the equivalent of a tablespoon of grains in a mortar, just to make them burst. Place in a tea pot of already boiled water, add a dash of turmeric and a zest of lemon, orange, kaffir lime or any other citrus fruit. Filter and drink hot. For more intensity, you can also add two or three sprigs of fresh coriander.

An infusion for the garden

Among the many preparations used in the garden, a recipe recommends infusing 150 grams of fresh coriander in 5 liters of boiling water, filtering after 30 minutes to 1 hour and allowing to cool before spraying as is, without dilution, to control aphids and mites.