What are the little buttons on jeans pockets really for? you will never guess

For most people, the most popular pants in the world were born in the United States and arrived in Europe after the Second World War. And the best informed know that his Denim canvas was in fact born in France, in Nîmes exactly where it takes its name (“from Nîmes”), before crossing the Atlantic to make a career. The historical reality is actually a little bit different. It is in the 16th century that we find its first traces. It is then a cotton and linen canvas used to make the sails of the Genoese navy. The Republic of Genoa exports it all over Europe, where it is used to make sails and tent canvas. In France the weavers of Nîmes tried to reproduce it, without success until they developed in the 17th century a mixture of wool and silk in serge weave, which they in turn exported. Irony of the story: it is for the markets of Genoa that the French producers conceive to tint their canvas in indigo blue, a color less dirty than the original natural beige.

It is this Denim canvas that the Levi Strauss firm sold in the middle of the 19th century to adventurers of the American gold rush, who made tent canvases and tarpaulins from it. And it was at this time that a tailor from Reno named Jacob Davis imagined using this canvas to make pants, which he reinforced with copper rivets at the pockets and at the fly. The product’s success with miners and loggers prompted Davis, who feared counterfeits, to propose an association with Levi Strauss in order to patent it. In addition to its particular fabric, the production of the tandem is distinguished by focusing exclusively on trousers, while the competition mainly offers overalls. In a few years Levi Strauss & Co saw the competition flourish, whose brand distinguished itself by its copper rivets and by the details that characterize its models, now forgotten, due to the tailor training of Jacob Davis: suspender buttons, topstitching orange linen back pockets (coordinated with rivets), gusset pocket, single back pocket, and even a martingale in the back!

Have you ever noticed that small buttons were present on the pockets of the latter?

What are the buttons on the jeans pockets for? 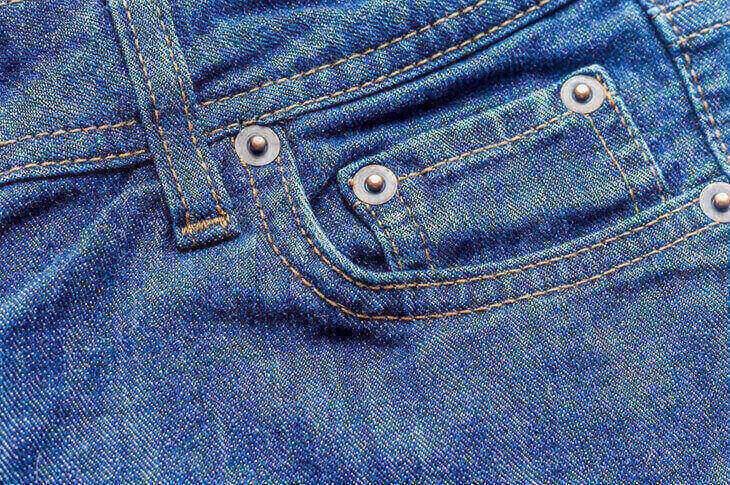 Years ago, their use was fundamental. Workers who wore pocket watches lost them quickly because the pockets could tear quickly.

Then the tailor Jacob W. Davis came up with the idea of ​​reinforcing the pockets with metallic elements. Levi Strauss also adopted this initiative and started producing jeans with small metal buttons at the pockets.

The idea was adopted by trouser manufacturers and that is why today’s jeans have small buttons. These are mainly intended to solidify the small side pockets that are used for coins, chewing gum or bus tickets.

The second significant evolution of the jeans occurs in the 1920s, when the term blue jeans appears by contraction (a typically American linguistic habit) of “blue of Genoa”. This time the legend is on the way. At the end of the war, American surplus stores flooded a Europe demanding the trousers seen in Hollywood films (and praised by numerous advertisements). In 1947 Levis launched the famous 501, characterized by its five pockets, the right one housing a second, derived from the fob pocket. Its only direct competitor is the Lee 101Z, which is distinguished by a zip fly (instead of the buttons used by Levis) and a slightly thicker fabric (11.05 Oz instead of 10 Oz, i.e. approx. 300 gr.) than that of Levis. The grammage of denim fabrics will never stop increasing, reaching 13.5 to 14 Oz today, and up to 22 Oz for the most high-end Japanese jeans. In the meantime, these universal pants will have made their revolution and will have conquered the entire planet, all sexes, ages and social categories combined. You have to wait for the hippie wave of the 70s to see it evolve, dress in various artifices and embroideries and adopt the calamitous elephant legs of the fashion of the time. A new stage was reached with the oil crisis of 1973, which imposed jeans, beyond the status of mass product, as generic trousers.

The following fifty years will complete making it the basic piece of a planetary uniform produced each year at 2.3 billion copies. Faced with this popularization of the genre, a fringe of amateurs and collectors will encourage the manufacture of more typical models: first it will be stone-washed, artificial aging obtained by abrading the canvas with pumice stone; then stone-bleached, which adds chemical bleaching to the latter; over-tinting, which follows the opposite trend; the used aged by sandblasting… At the same time the cuts are multiplying: the regular succeeds the slim (or cigarette), the skinny (very narrow at the ankles), the flare (return to the abominable bell legs), the bootcut , the baggy with low waist (aberration of style comparable to the elephant leg)…

While on the mass production side, manufacturing is relocating to the East, with Asia taking over from the Mediterranean countries (the main producers today being Bangladesh, Turkey, China and Pakistan), in the upper Japan has become the new Eldorado for aficionados, whose products are the most sought after by purists and collectors.

How to check if it is real jeans? 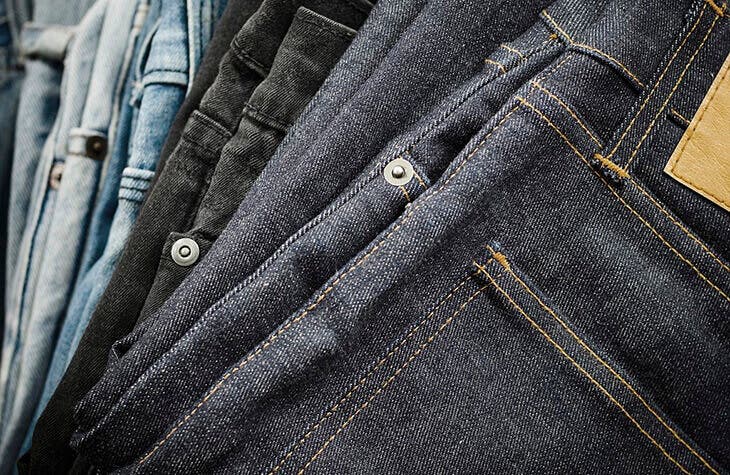 Most of jeans may hide flaws that you don’t notice when you buy them.

Many pants look like jeans, but they are not made of denim, that is, that special fabric of quality cotton thread, which keeps for years. Real denim has yarns woven diagonally between straight warp yarns and is characterized by its soft feel. Denim imitations are distinguished by a fabric of threads both horizontally and vertically.

In addition, the denim is only dyed on the outside, so the jeans have a color clearer inside.

Some jeans have oversized pockets, others too small. When buying these pants, pay attention to the back pockets, so that they can harmoniously fit the size of your hips.

Quality jeans are always well balanced and have pockets adapted to the size of the latter.

The distance between the back pockets is important. If your pockets are too far apart, your hips may look bigger.

Jeans, a not very ecological product

Paradoxically, for (extremely) popular as they are, jeans are far from being virtuous in ecological terms. From cotton grown in India or Africa, its manufacturing circuit takes it to Pakistan where it will be woven, then to China where the canvas will be assembled (factories in the Xintang region produce 800,000 jeans a day! ), then in Bangladesh, China or Syria where the finishing touches will be carried out – in particular sandblasting, violently denounced by human rights associations because of its danger to the health of workers. The question of the working conditions of employees of companies supplying fast-fashion (which supply Carrefour, Pimkie, Decathlon, Kiabi, Tesco, Walmart, Mark&Spencer, etc.) remains more than thorny, and our colleague Liberation has published a survey devoted to the Indian company KPR in which are denounced the workdays of sixteen hours paid two euros a day and the workers of the “factories-prison” (sic) crammed to ten in rooms of ten to twelve square meters. Beyond the human tragedy, the manufacturing footprint of jeans on the environment is just as heavy, the association Conso Globe having determined that the manufacture of jeans requires up to 25,000 liters of water, 75 kg of pesticide and 2 kg of chemical fertilizers… Data that the most radical environmentalists would do well to think about, railing against the system in their jeans made who knows where.

From mass market to high end

If the major part of this colossal global market concerns the mass market, some houses have made a specialty of high-end jeans. This is the case of the Italian Jacob Cohen, whose very neat products offer interesting quality/price ratios (between 350 and 550 euros a piece), Brunello Cucinelli (approx. 490 euros), Dolce & Gabbana (645), Loewe (430), and at the very top of the Kiton pyramid, with his 1,000 euro jeans! Besides Levis Vintage Clothing or Tellason, whose pants are assembled in San Francisco, seem cheap. Special mention also for AVN, a French brand (and which manufactures in France) born from a collaborative financing platform. Finally, last but not least, the small club of small manufacturers of high-end jeans was enriched at the beginning of February with a new member: Alexander Kraft Monte Carlo, a brand created last year by the director of Sotheby’s Realty France and a large elegant before the Eternal, who has made it his mission to make his style accessible. After suits, vests and pullovers, the house is now launching its jeans, which could only be well cut and well finished. Offered exclusively in an enhancing slim fit and in two colours: blue and ecru (actually an unwashed Japanese selvedge denim), it is stone-washed, features contrasting red pockets and interior lining, engraved solid brass buttons, a caramel leather patch and its outer seams are Navy blue and not orange as we usually know them, which gives the jeans a slightly dressier look.

The canvas used is a superior quality Italian denim, 13 Oz weight, and the manufacture is of course not carried out in a distant low-cost country, but in Italy where the workers have the culture of well-made and well-finished clothing. Thanks to the exclusively online distribution, its selling price is particularly placed, since fixed at 240 euros.